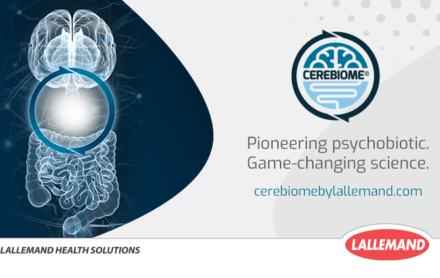 As pioneer and expert in research on the brain-gut axis, Lallemand Health Solutions also launches a new informative hub cerebiomebylallemand.com regrouping a mine of facts and evidences on the power of psychobiotics, paving the way to innovative science.

“CEREBIOME® is a unique and strongly documented psychobiotic formulation developed by the Rosell® Institute for Microbiome and Probiotics by Lallemand. It is the most documented psychobiotic with five clinical studies and several pre-clinical studies allowing to highlight eight mechanisms of action on the brain-gut axis. CEREBIOME® helps alleviate the physical and psychological symptoms of stress and feelings of anxiety. Such consistency of results is rare in this innovative field.” notes Lucie Lingrand, Product Manager at Lallemand Health Solutions”.

The first study demonstrating the effect of a probiotic on stress-induced gastrointestinal symptoms [Diop, 2008] was conducted with CEREBIOME®. It showed a significant reduction of these symptoms, as assessed by 62 criteria, in CEREBIOME® group compared to placebo after three weeks of intake.

Another pioneering gold-standard study [Messaoudi, 2010] conducted on 55 healthy volunteers demonstrated a significant reduction of psychological stress as assessed by a validated questionnaire (HSCL-90 test), in the CEREBIOME® group after 30 days intake compare to placebo. This was the first study demonstrating the positive impact of a probiotic on occasional stress in healthy humans.

“These findings led to official recognition from Canadian and Brazilian health authorities. CEREBIOME® is the first and only psychobiotic with specific approved health claims on mood and stress. This recognition from competent authorities adds tremendous value and indicates that the scientific evidences supporting this psychobiotic are robust, reliable and verifiable.” adds Lucie Lingrand.

In 2018, another randomized, double-blind and placebo-controlled study [Kazemi, 2018] using CEREBIOME® included 110 patients suffering from mild to moderate depression, receiving an antidepressant treatment for at least three months. The probiotic was used as an adjunct therapy to conventional antidepressant treatment and showed a significant decrease in Beck Inventory Depression (BDI) scores, from 18 down to 9 on average. These results are clinically significant, showing the patients were now categorized with “minimal depression” according to the validated assessment scale. Specifically, the CEREBIOME® group showed a decrease in the blood kynurenine/tryptophan ratio, which suggests that tryptophan was diverted toward the synthesis of serotonin and away from the inflammatory pathway (p<0.05).

Finally, a 2018 open-label study by Wallace and Milev found that in treatment-naïve patients, CEREBIOME® had a positive effect on mood, anxiety, anhedonia and perceived stress, lasting up to eight weeks after treatment. This pilot study has been used as a proof of concept for a larger, gold-standard, ongoing clinical trial.

To find out more about this innovative ingredient, visit cerebiomebylallemand.com and download the White paper to explore the power of psychobiotics.