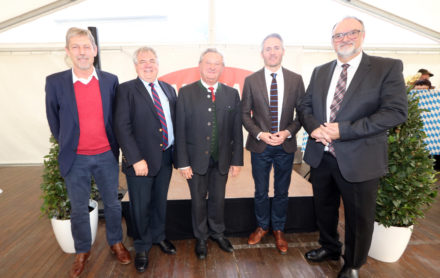 On Thursday 10 October we held the official opening of the new Passau specialties yeast plant. The new plant has a drying capacity of 1,100 tons per year of Wine Active Dry Yeast and was specifically designed for this purpose by our former colleague Mr. Rudi Kreuz.

The opening ceremony was attended by Messrs. Antoine Chagnon (CEO) and Bill Nankervis (COO) as well as a number of dignitaries such as customers and the mayor of Passau. As the meeting coincided with the annual Yeast Purchasing and Technical meeting, we also had in attendance colleagues from Denmark, The Netherlands, Switzerland, France, Estonia, Finland, Portugal, Poland, Germany, Austria, Italy, Brazil, South Africa, Canada, England and the United States of America. The attendee list confirmed that Lallemand is truly a global company.

During his address, Antoine thanked the community of Passau and the authorities for making Passau an obvious choice for the investment project. He also thanked the various contractors who worked on the project and made specific mention of the tremendous efforts of Konrad Bahle and Ulrich Eckermann who worked tirelessly during the past 2 years to realise the project.

Wine yeast produced in Bavaria will soon be available all over the world!