Lallemand, a proud partner of the 2016 Gourmet Thursday organized by the Chic Resto Pop 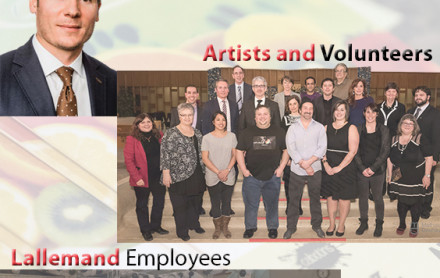 On Thursday, January 28th, the Chic Resto Pop held a fund-raising dinner for which Lallemand was one of the financial partners. The Chic Resto Pop is a social integration initiative established in the Hochelaga-Maisonneuve neighborhood of Montreal. In addition to providing affordable meals to more than 1,300 people daily, it helps unemployed individuals to enter the labor market by providing training and apprenticeship programs. Since 1985, the Chic Resto Pop has prepared more than 3 million meals for the disadvantaged and has trained more than 1 500 people to help them get jobs.

Antoine Chagnon was appointed Honorary President of the evening in which. Lallemand made a generous contribution of $ 30,000 so as to help the organization continue its mission.

The evening began with a powerful speech by Antoine Chagnon on the economic reality of the Hochelaga-Maisonneuve district and the importance of supporting organizations like Chic Resto Pop.

A five-course gourmet dinner prepared by local restaurants was served by volunteers and apprentices of the organization. Among the 155 attendees were several political and artistic personalities, including Louis-David Morasse and Lynda Johnson, popular Montreal actors; Mrs. Marjolaine Boutin-Sweet, federal deputy of the Hochelaga-Maisonneuve district; Mr. Réal Ménard, mayor of Hochelaga-Maisonneuve; and Mr. Luc Picard, producer and spokesman of the Chic Resto Pop organization. An auction was organized during the evening, resulting in over 65 000$ raised for the organisation.

All funds raised at the auction will be used to provide a healthy diet for children from underprivileged schools in the Hochelaga-Maisonneuve neighborhood in Montreal.